This week we are hosting C.A. Harms 2016 Yearbook! Revisiting all the novels that she published this year. Day 1 we take a look back at Olivia's Ride and Trinity's Trust from her Sawyer Brothers Series and Rush from her Montgomery Men Series... 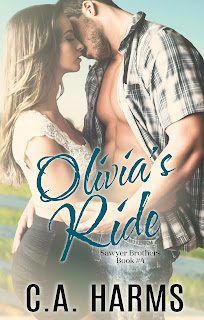 Keeton Pearce hadn’t lived a life full of supportive, loving family…
In fact, it was just the opposite.
He had been on his own for so long he had no idea what it felt like to belong. He didn’t want to rehash the life he left behind, or even think about it. But the hate from his father followed him, slowly eating away at the life he had begun to build for himself.
Olivia Sawyer had been prepped on how to deal with the advances of those college men she would encounter…

After all, she had been surrounded by three alpha men who made sure she knew just how to handle herself. But when she met Keeton Pearce, all those words of warning flew right out the window.


For the first time she had nothing to say. She was caught up in those eyes and that dimple.
The Sawyer attitude no longer gave her the ability to be immune. 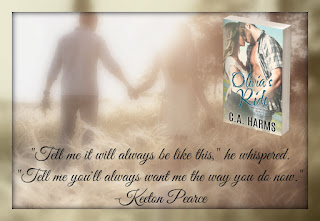 Neither of them counted on meeting each other. It was by chance, and no one expected that one moment would change their lives forever.
For the first time in his life, Keeton had hope.
He felt like he had found where he belonged.
But would he survive the interrogation of an overprotective father and the watchful eyes of Jackson and Noah?
Or would Keeton run for the hills, fearful of…
the Sawyer Brothers? 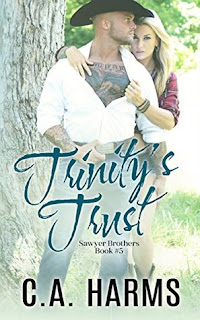 Trinity Flores stumbled upon the Sawyer family when she needed it most.

She was broken, lost, and looking for a new beginning.


They gave her love that most dream of, unconditionally devoted to her well-being.
The large, overbearing, protective, bullheaded Sawyer men vowed to keep her safe, and—of course—at times drove her crazy.
When Chase Douglas came to town, he hadn’t expected to do anything other than help his ill grandmother. Then the new deputy caught sight of the shy, blonde-haired beauty and it was impossible not to want to know her more. But he had no idea the torment he was about to face, or the obstacles he would encounter from the Sawyer Brothers. 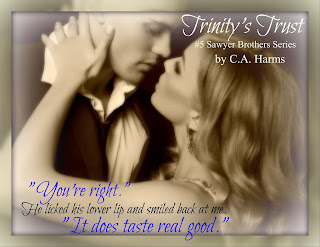 They didn’t make it easy for him to win her heart. He had to prove himself first, and that just made him fight harder to prove he was the right man for her.
Gaining Trinity’s trust was his number one goal.
Because in Chase’s eyes, no one deserved the love of a devoted man more than the woman who captured his heart. 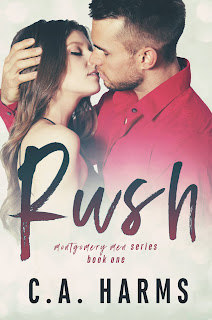 I was running from my husband, a man I thought I’d known.
Running from the hell he had put me through.
He’d nearly destroyed the woman I had once been and
I would do whatever it took to regain my freedom.
I would lie, and cheat.
I would steal if it meant that I never had to go back there.
I’d run and keep running…
But there was one problem. I hadn’t planned for Ashton Montgomery.
He was a distraction I couldn’t allow. Not if I wanted to stay safe. I had to remain distant, but he was relentless and had other ideas.
I caved because I hadn’t thought it all through, not in detail.
If I had I would’ve realized that you can only live in a fantasy world for so long before everything came crashing in around you. 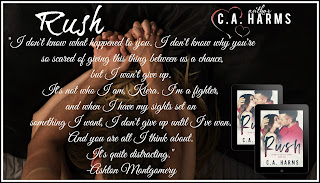 And those lives you’ve destroyed along the way, make you no better than the monster you were trying to break free from.
How could I have been so careless?
It wasn’t meant to turn out this way.
But the Rush of my freedom took control and I forgot how important it was to keep the secret of who I had once been.
And now I had nothing.
Only the fear that the man I’d run from would find me again, and finish what he started.

C.A. Harms is like any other addicted reader. She enjoys happy endings and HEA love stories. She hasn't always been a lover of Romance and had once been addicted to a good Mystery. Just recently she has taken on a new liking and now is a full blown Romance novel addict.


She lives in Illinois and enjoys spending time with her husband and two children. You will always find her with her kindle or paperback in hand as it is her favorite pass time.

Thank you for visiting us on Day 1 of C.A. Harms' Yearbook tour! Come back tomorrow where we revisit the Desired Affliction Series and Deceitful Choices!!