I received my complimentary copy of Stars Over Sunset Boulevard from Caitlin Valenziano,Associate Publicist at Berkley/NAL, Penguin Random House in exchange for an honest review. 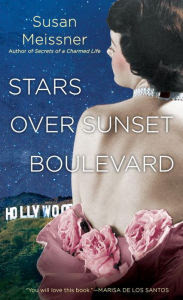 Los Angeles, Present Day. When an iconic hat worn by Scarlett O’Hara in Gone With the Wind  ends up in Christine McAllister’s vintage clothing boutique by mistake, her efforts to return it to its owner take her on a journey more enchanting than any classic movie…

Los Angeles, 1938.  Violet Mayfield sets out to reinvent herself in Hollywood after her  dream of becoming a wife and mother falls apart, and lands a job on the film-set of Gone With the Wind. There, she meets enigmatic Audrey Duvall, a once-rising film star who is now a fellow secretary. Audrey’s zest for life and their adventures together among Hollywood’s glitterati enthrall Violet…until each woman’s deepest desires collide.  What Audrey and Violet are willing to risk, for themselves and for each other, to ensure their own happy endings will shape their friendship, and their lives, far into the future.

I have to admit that I have not ever read Gone with the Wind or seen the movie.   That worried me a little starting Stars Over Sunset Boulevard only because I wasn’t sure how much of the book would revolve around something I am not really familiar with.        I had no reason to worry, I was not missing anything by not having seen or read Gone with the Wind.

The historical fiction labeling is what really made me pick up this book.    I love the era, the parties, the movie stars, and, of course, the cinema that was produced.    I felt like it was a simpler time to live in.   The look into the making of Gone with the Wind was fun because it was an inside look.   It wasn’t just the movie stars it was the story of the secretaries, the costume people, and others from behind the scenes.

Violet and Audrey’s lives were simpler but were not necessarily easier than the current time.    They went from being complete strangers who worked in the same secretary pool to truly being best friends.   The disagreements, the fun, and most of all the friendship were all genuine.         While Audrey was the strong friend to start, I felt like Violet came into her own because she lived with Audrey.   She was forced to stand up for herself, although there were a few times that she was a little shady in how she acted and I wasn’t sure that she was being a good friend.

There is a present time storyline within Stars Over Sunset Boulevard, but I felt like it wasn’t important to the story as a whole.    While it was fun to hear how the rest of the family turned out it did not catch my attention and I found myself skimming over that part of the story.