Below the Belt (Worth the Fight #3) by Sidney Halston 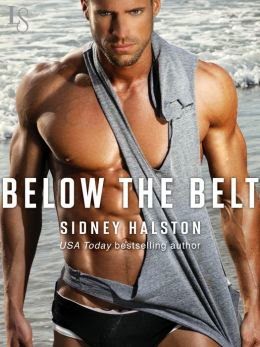 Once one of the most sought-after names on the mixed martial arts circuit, Antonio “Scarface” Marino watched his career go down for the count as he chased skirts and made tabloid headlines. Now he’s finally making a comeback, and it’s all thanks to Francesca Silva, a Brazilian bombshell as tough as any of her fighters. But who’s the real Francesca: the trash-talking trainer who rides him hard, or the vulnerable woman who blushes at his touch?

Francesca went to the mat to sign Tony because she believes he still has the potential to bring big success to her gym—if she can keep his head in the cage and out of her personal life. After a short-lived marriage soured her on love, a one-night stand is all she can handle. Now Tony’s kisses are stirring up complicated feelings—especially when he agrees to face her ex in the ring. Francesca’s used to freezing guys out. But Tony’s tempting her to give in to the heat.

This is my first Worth the Fight book and I already want more.     I was unsure what to expect when starting but when I finished I was left wanting more of these characters that became my friends.  I was invested in the outcome of this story.  I was unable to stop reading due to needing to know that everyone came out okay.    This doesn’t always happen with a book, but when it does I know it a book, a series, and an author that I will need more from.

In the beginning of the story, Francesca and Tony are standoffish, tough, and maybe a little unlikeable.   Yet as their story is told they become people, people with a history that most people would crumble under.  As the story continues, I found myself needing them to settle their pasts, find happiness, and learn to love again.

Francesca has a good reason to be tough, yet she is just a shell of who she really wants to be.   I loved watching her internal struggles and seeing her real self come out.   She fought with everyone she came in touch with, but mostly with herself.   She wanted to love, she wanted to accept Tony into her life, and she wanted to start living.   Eventually she realized that she was holding herself back.
Bad ass Tony was just that, a bad ass.   He thought he was tough, beyond hurting.   Yet when Francesca came into his life he learned a new lesson.   The lesson that he has feelings, he can hurt, and he is jealous.    Watching Tony put his party life beyond him and find what he wanted most in life opened my heart.  I felt for him when he was shut out or left alone.   I wanted, no needed, him to be happy.    He deserved it.

Below the Belt is book that I enjoyed.  I will certainly be looking for more from Sidney Halston and this series.