All's Fair in Love and Weddings by Christine S. Feldman 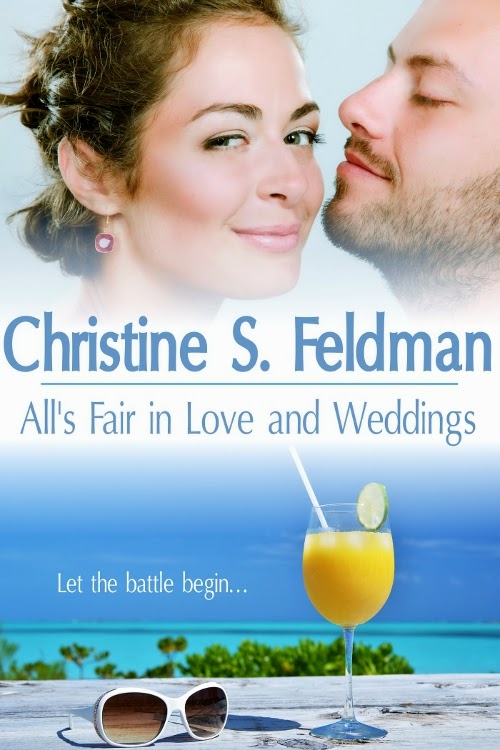 Prudence Collier spent the better part of her reckless youth proving that she was not aptly named, and unfortunately she burned a few bridges in the process, including where her family is concerned. So when her long-estranged sister invites her to her destination wedding in the Virgin Islands, Prue leaps at the chance to mend at least one broken family relationship and prove that she’s a changed person.

Tucker Davies, on the other hand, has come to the islands for a very different reason: to stop the wedding. As a childhood friend of the groom, he has reason to believe that his friend is about to make a huge mistake and is intent on not letting that happen. One thing he didn’t count on, though, was going up against Prue.

Determined to make up for the past, Prue resolves to keep Tucker from interfering with her sister’s happiness in the present and is willing to go to any lengths necessary to do so. Any. And if that requires a few tiny deceptions here and there, the occasional brush with the local authorities, and perhaps even instigating a barroom brawl, so be it. A sister has to do what a sister has to do.

But so does a friend, and Tucker has no intention of backing down, no matter how aggravating or even—to his surprise—appealing Prudence Collier can be.

The war is on, and neither side believes they can afford to surrender.

Which is a shame, because they’re both beginning to suspect surrendering would be a lot of fun…

Prue is a great character.    She is determined, klutzy, and so loyal.    Then bring in Tucker, who is just as loyal, but not nearly as klutzy, and you have an amazing couple.  They fight and get into bar fights, save each other from personal panic attacks, and still somehow become friends.   The things that Prue puts Tucker through would be enough to have even the calmest , most loyal man running to the hills, yet Tucker hung tight and did not give up on Shawn, his best friend, or Prue.

The location on the beach, had me day dreaming about the waves and impressive hotels.   I could picture Prue on the balcony over looking the beach, the ferry that brought everyone to the island, and the bar on the beach.    When a book pulls you in so quickly and it becomes something you cannot put down, It has to be a winner of a story.

I believe I have read all of Christine’s books and love them all.   This one, All’s Fair in Love and Weddings, is fun and refreshing.  I laughed so many times, many times getting odd looks from whoever was sitting near me.   When a book can make me laugh out loud I know that I will need to recommend it to my friends.

She froze in front of him like a deer caught in the headlights, and despite the fact that she had some serious explaining to do, the first thought that went through Tucker’s mind when her eyes widened was that they certainly were a remarkable shade of green, weren’t they?

“Good morning,” she returned warily, and then those green eyes of hers narrowed.

Well, that seemed like an odd reaction. If either of them ought to be upset, he was fairly certain it should be him, not her. And had he not been so intensely curious as to why she had sent him on a wild goose chase yesterday, he might have been more upset than he already was.

“Coffee smells good,” Tucker said conversationally with a nod toward her cup. “Is there more where that came from?”

“Depends,” Prue returned, eyeing him as if she expected him to make a sudden move at any time. “Are you a guest of the resort?”

“Are you kidding? At their prices? No.”

“Then I think you’re out of luck.” And she drained the rest of her drink in front of him.
He watched her, unfazed. “Yeah, my luck has been pretty poor the past twenty-four hours.”
“Has it?”

She seemed to be avoiding his gaze. Under the circumstances, he was not surprised. “But it’s taking a turn for the better now, because I was hoping to run into you again.”

“I’ll bet,” she muttered, so much under her breath that he almost missed it.

“Mainly because I was hoping you could explain something to me. Like why you sent me racing after the wrong ferry?”

After a moment’s pause, she turned to look directly at him and widened her eyes again with what—in any other situation—he might have interpreted as innocence. It was almost, but not quite, convincing. “I don’t know what you mean.”

“I think you do know what I mean. You sent me to the Water Island ferry.”

One of her eyes twitched before both of them grew even wider. Too wide. “That’s the one you wanted, wasn’t it?”

He looked at her evenly, wondering what kind of game she was playing at here. “No. It wasn’t.”

“Well, that’s what I heard you say. You specifically said Water Island, I’m sure of it.”
“I said St. John.”

She shook her head. “I think you must be confused.”

Understatement of the year, he thought. “Very, yes, but not about the islands. And neither are you, are you?”

“I think you must be remembering wrong.”

“I fell for that line once already, remember? What else have you got?”
Instead of answering, she played with the empty coffee cup in her hands.

“Look, sweetheart, I don’t know if you just like to do this kind of thing to other people for kicks, but I’m really not in the mood for it today. I had a very long night, and it would be hard to say if the crowning moment was when one of the tires on my car blew up or when the tow truck guy discovered he was lactose intolerant while I was still riding beside him in his truck, but—” He caught another twitch around her eyes then, one that almost looked like guilt taking its toll. And then another thought occurred to him for the first time, and he stared at her, incredulous. “Wait—did you have something to do with that?”

“A lactose-intolerant truck driver? Not likely.”

She played with her cup some more without looking up, and he realized he had his answer.
“Are you kidding me?” He was almost too bewildered to be angry. Almost. “Do you usually screw over the people who do you favors, lady, or am I just special?”

Her head shot up then, and she had the nerve to look indignant. “Screw people over? You’re one to talk!”

“Huh?” Tourists all over these islands, and he had to cross paths with the one who appeared to be an escaped mental patient. A very attractive mental patient, he thought as a distracting curl escaped from the band she’d used to pull her hair back into a loose ponytail, but a mental patient nevertheless. “What are you talking about?”

“I’m talking about that wedding you’re so anxious to stomp all over, that’s what.”
His irritation grew. “I don’t want to ‘stomp’ on anything. I just want to—”
“Ruin the bride’s special day. I know.”
“The bride—”
“Is my sister.”

He blinked and then stared at her, and she nodded back, her displeasure with him written all over her face. “No…” he breathed in disbelief. 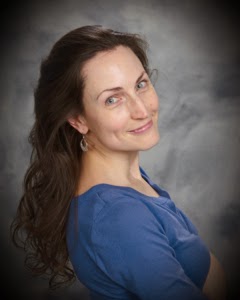 Christine S. Feldman writes both novels and feature-length screenplays, and, to her great delight, she has placed in screenwriting competitions on both coasts—and has even won a couple of them.  In 2012 one of her screenplays was featured as a staged reading in New York City at the Gotham Screen International Film Festival (http://www.gsiff.com/content/staged-screenplay-reading-1), and later that same year she signed her first publishing contract.  When she is not writing, she is teaching kindergarten, puttering around in her garden, ballroom dancing with her husband, or doing research for her next project.  Please visit her at her website http://christinesfeldman.com, on Facebook at https://www.facebook.com/ChristineSFeldman, or follow her on Twitter at https://twitter.com/FeldmanCS.