Review for Before the Devil Fell by Neil Olson 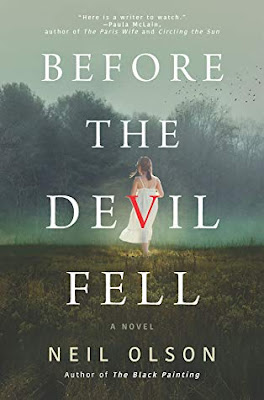 Will Connor returns to his hometown, a village north of Boston, to care for his injured mother. He’s kept his distance from the town since high school, but once home he finds himself reexamining a horrific incident that took place during one of his mother’s “spirit circles.” His mother had embraced the hippie generation’s fascination with New Age and the arcane, but the unexpected death of a close friend put an end to the meetings of the modern-day coven.

As Will looks deeper into his family’s history he discovers that her practices weren’t so much a passing fad but the latest link in a long tradition of New England witchcraft, which still seems to hold a strange power over the town. Will hopes that unearthing the facts about the death will put his questions to rest, but there are those willing to resort to violence to keep those secrets buried.

I had no clue.   I didn’t know that I could read a book and have no idea how it would end until the very end.   There were so many directions this book could have gone, and I love how it went.    The ending tied it all together perfectly and gave me an ending that I keep thinking about.

Sam was an intriguing character for me.   I knew she was unique; she had a heart that would keep Will safe, and she knew much more than she thought she did.   Between Will and Sam, they took the clues they were given, the knowledge they had, and the information they discovered from various sources and put it all together so they had ideas on what they were up against.    The who they were working against was an unknown and a surprise to them both.

I’d recommend this as a quick read with a paranormal twist and clues that are fun to try to follow.