Today we have the release day blitz of Susan Mesler-Evans Most Ardently! Check it out and be sure to grab your copy today! 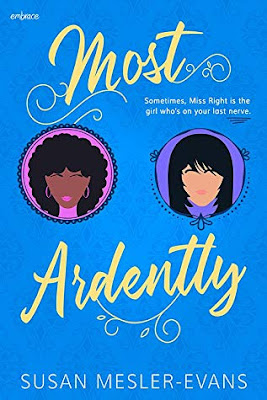 Elisa Benitez is proud of who she is, from her bitingly sarcastic remarks, to her love of both pretty boys and pretty girls. If someone doesn’t like her, that’s their problem, and Elisa couldn’t care less. Particularly if that person is Darcy Fitzgerald, a snobby, socially awkward heiress with an attitude problem and more money than she knows what to do with.   From the moment they meet, Elisa and Darcy are at each other’s throats -- which is a bit unfortunate, since Darcy’s best friend is dating Elisa’s sister. It quickly becomes clear that fate intends to throw the two of them together, whether they like it or not. As hers and Darcy’s lives become more and more entwined, Elisa’s once-dull world quickly spirals into chaos in this story of pride, prejudice, and finding love with the people you least expect. 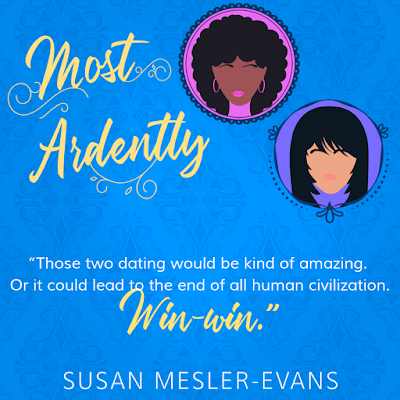 Charlene had gotten stuck dancing with Colin again. Well, maybe “stuck” was the wrong word. He’d been very polite about asking, and he was actually a pretty good dancer. And they’d been right next to a speaker, so the music was able to drown most of his latest speech out. She had ducked into the bathroom, and was about to leave her stall to wash her hands when the door opened again, and three sets of feet walked in. They all stopped at the mirror, doing their makeup. And gossiping. “I can’t believe Bobby has been talking to her all night,” a familiar voice said. It was either Cora or Louise, but Charlene had no idea how to tell them apart. “It isn’t her birthday.” “I know. And she’s not even as pretty as his last girlfriend,” the other twin said. “And her family.” “God, I know. I’m embarrassed for them. Even the one that’s not actually related to them.” “The middle sister is so boring. And ugly.” Charlene felt her chest tighten on Maria’s behalf. Option 1: Burst out of the door and scream at them both for being judgmental brats, and probably prove their point. Option 2: Stand here and do nothing. Ugh. This is bullshit. “And the youngest… God, what a train wreck, am I right?” Both twins laughed. “She’s a teen pregnancy waiting to happen. I hope Bobby gets over Julia or whoever soon. Then he can go back to girls actually worth his time, right, Darcy?” That explained who the third girl was. “I don’t do gossip,” Darcy said. “Oh, come on, we’re alone.” Charlene barely repressed a snort. “You can be honest.” “Yeah, didn’t you get stuck dancing with the fat one?” the other twin asked. “Her name is Elisa,” Darcy said, voice suddenly sharp. “And I wasn’t stuck. I could’ve said, no.” “We saw her screaming at you earlier.” Oh, Elisa, what did you do now? “She wasn’t screaming. It was just a disagreement. Very mature.” “She looked really pissed off.” There was a pause. “What are you thinking about? You have that look on your face.” It was a moment before Darcy answered. “Not much. Just the… joys of a spirited girl and a pair of fine eyes.” One of the twins snorted. “Man, you’re weird. Who talks like that?” “I knew getting her that word-a-day calendar was a bad idea,” the other said. “Come on, Cora, let’s go dance. I think they’re back to good music.” Cora and Louise left, and Darcy was quick to follow. Finally free, Charlene popped out of the stall, and washed up as quickly as possible so she could find her friend. She couldn’t stop thinking about what she’d overheard. She had a bad vibe from Cora and Louise right from the start, but she’d tried not to judge too much. (Leave that to Elisa.) But it looked like in this case, her first impression had been correct. Darcy, however, had been a surprise. Not only did she not participate in the Benitez family trash-talking, she’d even kind of stood up for them. Well, for one of them. And Charlene was willing to bet all the money she had that she knew exactly who that spirited girl was, and who those fine eyes belonged to. She paused, going back-and-forth in her head. She’d never meddled in Elisa’s love life before, but that was mostly because she had no love life to speak of. Her first instinct was to let her know she had an admirer – but given that the admirer wasn’t her favorite person, was that really wise? But they did have a lot in common. Those two dating would be kind of amazing. Or it could lead to the end of all human civilization. Win-win. Susan Mesler-Evans is a writer, college student, D&D enthusiast, theatre nerd, and horrific procrastinator. Born and raised in Columbus, Ohio, Susan now lives in Florida, and can often be found reading, scrolling through Tumblr until 2 AM, overanalyzing her favorite fictional characters and relationships, bingewatching comedies on Netflix, thinking about writing, and even, on occasion, actually writing. Most Ardently is her first full-length novel. You can find her at susanmeslerevanswrites.com.