Another Woman’s Daughter by Fiona Sussman 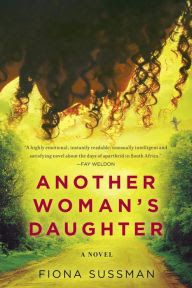 Celia Mphephu knows her place in the world. A black servant working in the white suburbs of 1960s Johannesburg, she’s all too aware of her limitations. Nonetheless, she has found herself a comfortable corner: She has a job, can support her faraway family, and is raising her youngest child, Miriam.

But as racial tensions explode, Celia’s world shifts. Her employers decide to flee the political turmoil and move to England—and they ask to adopt Miriam and take her with them. Devastated at the prospect of losing her only daughter, yet unable to deny her child a safer and more promising future, Celia agrees, forever defining both their futures.

As Celia fights against the shattering violence of her time, Miriam battles the quiet racism of England, struggling to find her place in a land to which she doesn’t belong—until the call of her heritage inexorably draws her back to Africa to discover the truth behind her mother’s choices and uncover a heartbreaking secret from long ago…

Africa during the apartheid is not an easy era nor is it an era I am overly familiar with.    Yet, I could picture myself living in the house with the maids and servants.    With the discrimination so prevalent in that part of the world that is has become the everyday norm.    I could picture the everyday life of Celia and that of her masters.    Yet, I could not picture sending away your daughter to live in a world you know so little about and that is so far away.    That is what Celia does.   I understood that she did it for the better of Miriam.   So that she could be safe and not have to live in the world Celia does.

While I think Michael and Rita had Miriam’s best interests at heart, I feel like they ripped her life apart and were incredibly selfish.   They wanted what they couldn’t have, a daughter, and took advantage of a situation to get it.    Then Rita was horrible.    I could not help but dislike that lady.   As a madam, as a mom, and as a wife there was nothing good in her.      Michael on the other hand tried.   He wanted to be a good dad, master, and husband but did not have the right tools to accomplish it all.   I think by the end of the story he realized that he had things that had to be done and said to make up for the mistakes he made.

The person I felt most for was Celia.   I cannot imagine the life she was forced to live.   Not the working part, everyone should have a job.    The part of sending her children away once they reach a certain age to live with their grandmother, the fact that her husband and her could not see each other due to their jobs and it seemed that her husband was a deadbeat anyways, and the fact that she knew that she could not give her children the type of life they deserved.      I know that it was the era, the timeframe, the way of life, but it was still hard to read.   I wanted to make a difference, to show her that someone really did care.

This is a great story that brings to light the hardships that the colored people in South Africa had to live through.    While it is fiction there has to be truth in it.      It is not an easy story to tell or hear about yet it was so enthralling that I read it in one sitting not able to put it down.    I recommend getting a copy of Another Woman’s Daughter as soon as you can.